What is the YI 4K Action Camera?

For quite some time, it seemed that the GoPro’s Hero4 Black was considered as the one reigning the throne in the category of action cameras. After all, it has the capacity to shoot 4k at up to 30 frames per second, as well as 1080p at an amazing 120 frames per second. After two years of reign, a challenger came into the market – the Yi 4K action camera. 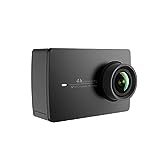 In terms of design, the Yi 4K camera can capture hearts. It has been patterned from the GoPro cameras, which means that the similarities are quite evident. It introduces a very familiar box design which is flat on both top and bottom, with a bit of a curve on its sides, which gives it a unique appeal.

The lens of this camera is a 155-degree, f/2.8 lens located towards the left of the center. While the lens protrudes, an integrated hood is provided to give it a good amount of protection against bumps and movements. This model also comes with a single button on its device, along with a USB Type-C port on its side. Towards the bottom part of the camera, there is an access door that is used for its 1,400mAH battery, as well as a MicroSD slot, and a tripod mount.

Talking about the tripod mount, you may notice that the placement is aligned perfectly along with the lens, rather than placing it at the bottom of the camera. This only means that when you mount this camera on a tripod, the image will find its center on the pivot point, which is essential when capturing wide-angle footage, where a single inch can already make a huge difference when it comes to distortion.

The faceplate of the Yi 4K action and sports camera features a carbon fiber pattern. The rear side of the model is quite simple, without nothing else than a single glass sheet which serves as the interaction point for its 2.2-inch “retina” touchscreen. Overall, the design is simple and sleek, without extra frills added. This may also mean a compromise on its durability, because the camera is not shockproof, waterproof or dustproof, unless you place it inside its housing.

On top of the design, the real fun comes in when you look into the actual performance of the Yi 4K action and sports camera. It has been constructed around the Exmor R 12-megapixel CMOS backside-illuminated sensor of Sony. It is also powered with an Ambarella A9SE processor that is a latest processor. The camera is also designed to produce 4K+ video.

In comparison to the GoPro model, the Yi 4K action and sports camera makes an interesting turn by offering 4K video at 60 frames per second, eventually winning over the 30 frames per second of the Hero 5 Black. This is quite an accomplishment, considering the fact that other manufacturers have also attempted to beat the competition in this aspect.

On the other hand, if you are more interested in using your camera for slow motion features, you may be quite disappointed with the performance of the Yi 4K action and sports camera. Its maximum frame rate is 120 fps at full HD 1080p display. The 720p stays with its limitations at 240 fps. True, these figures are not exactly bad at all, but it seems that the manufacturer has failed to maximize the capacity of the camera when compared to its actual processing power.

When shot using well-lit conditions, the quality of the image of this camera is amazing, as the images stay sharp from edge-to-edge. The camera’s dynamic range is quite solid, with its different profiles to choose from. The fisheye feature of this model also comes in an integrated lens distortion correction.

Another feature that captured the attention of action camera lovers is its electronic image stabilization. While it may not really smooth out the bumps captured during a rough mountain biking session, but it can significantly reduce the overall shakiness along the way.

This camera also comes with an app – the Yi’s Action App, which can be downloaded on both iOs and Android. When paired with the camera, it can give you control over the device, showing a live feed of the camera capture. It is quite responsive, and with minimal lag at the same time.

Conclusion
Overall, Yi 4K action camera is not just a copy of the GoPro camera. It has its own set of features and advantages. For one, when it comes to affordability, there is no question that the Yi 4K camera is relatively more affordable. Not only that, the manufacturer was able to introduce some features that make the image quality quite impressive, and somewhat interesting, especially for those who love capturing action on the go who would not want to spend a huge amount of fortune over a GoPro camera.