Why Buy the ViewSonic PX800HD?

Experience cinematic entertainment just staying in your homes. The ViewSonic PX800HD is an entertainment projector intended for personal and leisure activities. Whether you are watching movies or just playing your favorite video games with friends or family, then this portable yet multi-purpose projector is for you.

If you’re looking for a large screen with a very clear resolution projector into your homes, then this projector is something you should consider. It will bring your home theater experience into a different level. 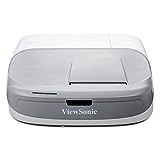 There’s no place like home. In a day of tiring work, there’s nothing more relaxing than sitting on your sofa or bed while watching a favorite movie or show on TV. However, we could make this experience more theater-like using the ViewSonic PX800HD Ultra Short Home Entertainment Projector. If you want to proceed further, then scan below to find out more.

This projector ain’t nothing for the price you’ll be paying. Its an astounding projector with very promising features. In fact, it was highly regarded by the Projector Central as one of the best projectors for use.

Its build seems compact and good. It appears to be large and bulky. Opposite to what it advertised, this projector is no portable and should be used only at homes. It’s glossy finished is quite casual and has a lot of home theater-vibe into it, making the device a perfect addition into your entertainment room. It’s great for large and small rooms as well. With its impressive ultra-short throw lens, you will not worry much on consuming a lot of space or people passing by while watching or playing your games.

The visuals are beautifully captured. Colors are highly defined with its improved display technology. A screen size that could go from 70 to 150 inches is totally amazing to see. Even at very large screen sizes, you’ll see crisp details to the imaging of this projector. However, the focus control is a bit hard to find so its best to set it readily and spend a few minutes with it when you’re using this device.

Audio performance is so-so for this projector. It’s best to find and use a separate speaker with powerful vocals instead of using its integrated speaker. Also, the built-in fan is quite loud. It sometimes does distract most especially during long hours of using the device. Aside from that, it easily heats out. Thus, good and secure ventilation should this device be placed.

Installation through the guide manual is simple and straightforward. The menu interface is easily understandable with familiar buttons and signs in it. Compatibility with various devices is on-point with or without using the ports and cables given. A three-year warranty is definitely long and something to look forward with this device.

As to its pricing, it’s quite expensive yet totally worth taking a shot. It’s giving very clear imaging output comparable to the likes of projectors from other brands within the similar price.

To know more this mini-projector, here are some features of the device. This includes the following;

A. Size, Build, and Interface
Weighing about 13 pounds, this box-shaped device is heavily white and grey aluminum matte with soft curves on its bordering edges. Resembling like any projector, this device measures with dimensions of 17.1 inches by 15.3 inches by 6.0 inches. Main menu interface including its buttons is situated on the left side portion of the device, near to the exhaust fan.

Nevertheless, indicator lights to detect power and play is easily seen on the top interface of the device. On its back, multiple ports for different cables are located. This includes two HDMI ports, audio in and out ports, computer input and output ports, one for video, and another for USB connection. Below all these ports, a slot is intended for the socket or plug for a power source.

B. Display and Screen Output
This projector innovates by enlarging its screen capability, size, and resolution. Nonetheless, it goes up to 150 inches screen size with full HD resolution at 1920 x 1080 pixels. Clarity of colors is shown featuring its SuperColor TruCinema Technology which brings 709 RGB colors on the screen. Aside from that, it includes a 2000 lumen brightness that embraces vividness even during the daytime. It also has an Eco-Mode for power shortages and emergencies that could last only for 2000 hours.

Breaking through with its ultra-short throw lens capability, this projector can be placed near to a wall or just a few centimeters away for a clearer vision on the presentation of images within the screen. Its wide array of contrast options through the Brilliant Control Panel which brings four times contrast ratio higher than any typical projector screen. It has a manual optical zoom feature to get an absolute picture on the screen.

This projector makes your gaming experience more enjoyable through its dual option (low or high) for input latency. The ‘low’ option could go as much as 16 ms providing a faster frame by frame agility.

C. Audio Capability
The device delivers an audio impressing performance with its two built-in 10W speakers. Other than that, this device could be supported by external speakers easily attach through its existing multiple ports.

D. Compatibility and Connection
It supports multiple devices and platforms like Android phones, computers, laptops, and media players. The package along with this projector includes a power cable, a VGA cable, a black multi-function remote control, and a user manual for instructions on installing and using the device. For best use, its recommended by the manufacturer to put a black screen diffuser (Sonic BCP100 or Sonic BCP120) purchased separately to improve its image quality.

E. Warranty
It includes a three-year labor and limited parts warranty and a one-year lamp warranty to assure customer satisfaction and the device’s performance. Check out other review of ViewSonic PJD7828HDL projector.

This Viewsonic’s award-winning projector is practically one of the best projectors to choose from. Comparing an LG UST model at a similar price, this one has its edge on lumen and picture quality. It has also accommodated larger screen sizes up to 150 inches. However, if you’re still looking for more picturesque detail, then you could select for the PX700HD or PX706HD models to get it. But nonetheless, if you just want to play video games, then this Viewsonic’s model is perfect for your utilization.