Some things never go old like a favorite movie or a song that is on repeat on your music playlist. Similarly, there are shaving brands that do not lose its glam that even in 2019 has been constantly used by a lot of men. Introducing, the finest Braun Series 7 760cc, one of the best electric shavers for men. The Braun Series 7 shaving system has been tested and gets better through time. Nonetheless, it has been proven still being bought by a lot of people even amidst multiple existing brands and models having advanced technology.

Do you want to know its secret? Then, better check this review and get acquainted with this product.

Here are the Braun’s Series 7 line with summarizes on the main differences points between the Braun Series 7 models: 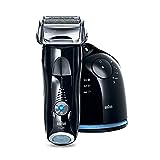 Being dubbed as an intelligent shaver, this is powered by the sonic technology effectively capturing dense beards and hairs well. It works well with sensitive and less contoured areas like the jawline and the neck.

It runs with a maximum of 10,000 micro vibrations per minute when needed. It includes an ActiveLift trimmer and two synergistic Optifoils to get a smooth and deep cutting as close as 0.05 mm hair length.

Similar to other Braun’s shavers on the 760 series, this device is black finished embodied with a plastic body and rubber inserts to its sides for easy grip. The interface of the device includes a LED indicator for battery level detection, a power button, and two side buttons for personalized adjustments and modes. These three indicated functions are utilized in order to address different skin surfaces.

This 4.8-ounce shaver has an intuitive clean and charge unit that is included in the package. This separate cleaning system brags upon its 5 in 1 action to every razor it encounters. Likewise, it hygienically cleans through the mixture of water, lemon scent, and alcohol. Then, dries and lubricates it as needed.

The shave is 100% waterproof and could be used while still plugging in the device into the socket.

Aside from the razor, the device contains a charging or cleaning base, a charging cord, a cartridge, a small cleaning brush, and a traveling case for the razor.

1. Shaving Performance
The shaving system works with the combination of three most advanced shaving technologies. Likewise, first of all, the Intelligent Sonic Technology which generates power to your shaving. It uses up to 10,000 micro-vibrations to intense and large beards and hairs. Second in the list, the ActivLift trimmer. This cuts flat-lying hairs that are mostly located on the curved and sensitive skin areas like the neck, chin, and the jawline. And lastly, it includes a double optifoil to ensure a smooth and non-irritated shaving operation.

2. Intuitive Controls and Functions
The interface of the shaver consists of single click buttons. The power button which is mainly seen in the middle of the interface. Just below of it, are two black coated side buttons that are used for adjustments with the three personalized modes specifically extra-sensitive, normal and intensive. Located near the base, resides the LED indicator for battery level detection.

With regards to the clean and charge machine, the operation is just straightforward. Just dock on the razor, push the power button and then done.

3. Cleaning and Maintenance
You could clean the machine in two ways. First, you could do manual cleaning. Since the device is waterproof and the head is easily removed, you could clean it all by yourself with running water. Second, it has an auto-cleaning that is operated by the clean and charge unit. Through this system, cleaning goes effortlessly with a single touch button or click.

4. Battery and Charging Capability
Unlike any other shavers, this cordless razor could be used while plugged into a socket. Nonetheless, if you desire to charge the battery, you could do it in two ways. The clean and charge unit and an external AC adapter with a 50 m. cable on it. The battery lasts for about 8-10 shaving periods if unplugged into its power cord.

5. Flexibility
The device is made for utilization on sensitive and highly irritant skins. This will do well in both wet and dry operations. However, you’ll expect it to be more intuitive with the dry operation.

There are a lot of terrific and positive reviews regarding the product’s performance. In fact, this has been a favorite for some of its users. It’s easy to use with user-friendly buttons and controls into the interface. The design is quite typical of a Braun series shaver product, black finished made from mostly plastic and rubber inserts on its sides. The device has simple cleaning operation. Just dock it on and push the power button to operate it.

The shaving performance is quite impressive. It recognizes high-end shaving technologies ensuring a smooth and close on shaving power. Though with the great generating power it has, you’ll expect that it will induce loud and unnecessary noises during operation. You’ll experience also vibrations upon utilization of the device.

Nonetheless, there are users who had breakouts and patches upon using the device. Adjust consecutively the modes to cater for adjustments with the device’s power.

Also, some of the users notably indicated the design of the trimmer. The trimming tool is too close to the razor for which is unideal when you are making side cuts on burns.

Other than that, the device is quite costly. The replacement parts and cleaning cartridges are also expensive for which makes it hard to maintain on.

How Does It Compare with Braun Series 7 740s?

Since both of these shavers are coming from Braun Series 7, there is notably similarities between the two devices. As noticed, both products have the same built and material used. They are black finished made mostly of plastic. Aside from that, both have a similar interface with LED indicator, power, and personalized buttons.

But with an improvement of features on the shaver, the price will also get an increase as noted. Nonetheless, there is really not that much difference between the two devices. Both really have a lot of similarities on quality, durability, and even on performance.

p.s: There is an other higher version of Series 7 is Braun Series 9. Check it out what are the differences between Braun Series 7 vs. Series 9?