Why Buy This Home Entertainment System?

The Bose Lifestyle 650 does not just give you better sounds. It gives you a theater experience of 5.1 surround sound within the confines of your home. This model contributes almost all of the features and functions that you would expect from a high-end entertainment system.

Bose built a name for itself with its radio repair service when they were starting out. This led them to be a leading speaker and headphone innovator. However, their home theater system venture has not been the smoothest entry for the company. The Bose Lifestyle 650 is a step up for the company in the compact entertainment system market.

The most interesting aspect of the 650 Home Entertainment System is its 360 degree sound capabilities of the Omni Jewel satellite speakers. No longer do you need to have the speakers directed at the viewers or listeners. The speakers create an infinite focal point that immerses you into the movie that you are watching.

The Bose’s home theater system connects with various streaming services. It is also compatible with the latest media connection, including electronics that deliver 4K content.

With all of the functions and features of the Bose Lifestyle 650, is it really worth it for any movie buffs who want to get the most out of their content? Is it also a good fit for any audiophile who wants to hear their music with high-fidelity quality? Let us answer these questions by taking a close look at the Bose Lifestyle 650.

The Bose Lifestyle 650 consists of a console, center channel speaker, the Acoustimass bass module, and four OmniJewel satellite speakers. You control everything through the console receiver including the volume and input source. The receiver has six HDMI ports that support 4K input.

We already like the look of each component of the system. The console has tempered glass and anodized aluminum finish surface. Not only does this make the entertainment system look good, but it also does not reflect much of screen on your TV. This helps reduce any distractions while watching your shows or movies.

The best feature of the Bose Lifestyle 650 is the design of the OmniJewel speakers, which is the same design from the Lifestyle 600. What is surprising about this speaker is its two drivers pointing at each other. The space between them is the grill where the sound comes out.

Normal speakers usually have a single driver situated in front of the grill. To generate sound, they vibrate the driver to create waves within the air. These waves travel towards you from the speaker box itself. In order for you to perceive this sound or have you believe that a sound effect is coming from a specific direction, the speaker needs to be pointing at you.

The OmniJewel speakers take this concept to a completely different level with its sound processing system. The unit adjusts the volume of a specific sound coming from a single speaker while keeping the volume of the other speakers at a normal degree. The sound coming from the two drivers disperses in a 360-degree patter within the middle to deepen the effect.

Typical home theater system needs proper adjustments on certain rooms so you can get the most out of it. This is why some people are willing to pay an expert to calibrate the speakers in the right position. Fortunately, the Bose Home Entertainment System calibrates itself with the ADAPTiQ function and a special headset.

Simply wear the headset while sitting on your couch or chair while the system calculates your position. The system will emit various tones from the speakers to calibrate itself. Within ten minutes, the speakers will optimize the sounds from its speakers and you will save money from not hiring a contractor. At least when the system properly calibrates the speakers. We had to run the ADAPTiQ several times to get the surround sound right and not leave it to 2.0 sound quality.

While the features and functions of the Bose Lifestyle 650 are robust, the system still has some flaws that we noticed such as the remote. We experienced moments when the remote fails to enter a menu or increase the volume. Fortunately, these experiences are quite a few. 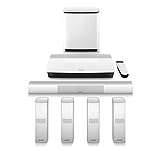 In terms of surround sound, the Bose Lifestyle 650 delivers in spade with its OmniJewel satellite speakers. These units will make you think that the sound is coming from a specific part of the room. Think of it as if the speakers are moving on its own around you so it can generate an immersive sound experience. If you are used to the 5.1 surround sound system, using the Bose Lifestyle 650 will be like experiencing the immersive effect for the first time. Backing the experience is the Acoustimass bass that delivers quality low bass sounds.

We also like the system’s ADAPTiQ calibration feature, which is not common among other surround sound system. While the system still needs some work, the auto calibration is a major deal for any movie buffs if it functions, as it should.